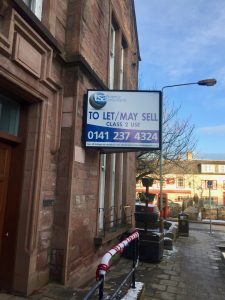 The closure of more than a third of Scotland?s banks since 2010 is set to come under the microscope, as the Scottish Parliament?s Economy, Jobs and Fair Work Committeecalls on local businesses and consumers to ?speak out? on the impact on local communities and economic growth.

?For Scotland to lose more than a third of its banks in just 7 years seems a staggering statistic. This inquiry will work to respond to significant public concern that the impact of closures is felt most in places where no viable alternative exists.

?We are calling on small businesses and consumers to speak out on vital questions, such as: Will closures of local banks have an impact on your business? What is the impact of local ATMs closing or imposing charges for transactions? And how do bank closures impact on your local high street?

?The committee wants to know what can be done to help remedy a seemingly relentless decline in Scotland?s banks. Crucially, what are the alternatives that can help support local businesses and communities, and enable them to thrive for the benefit of all?? 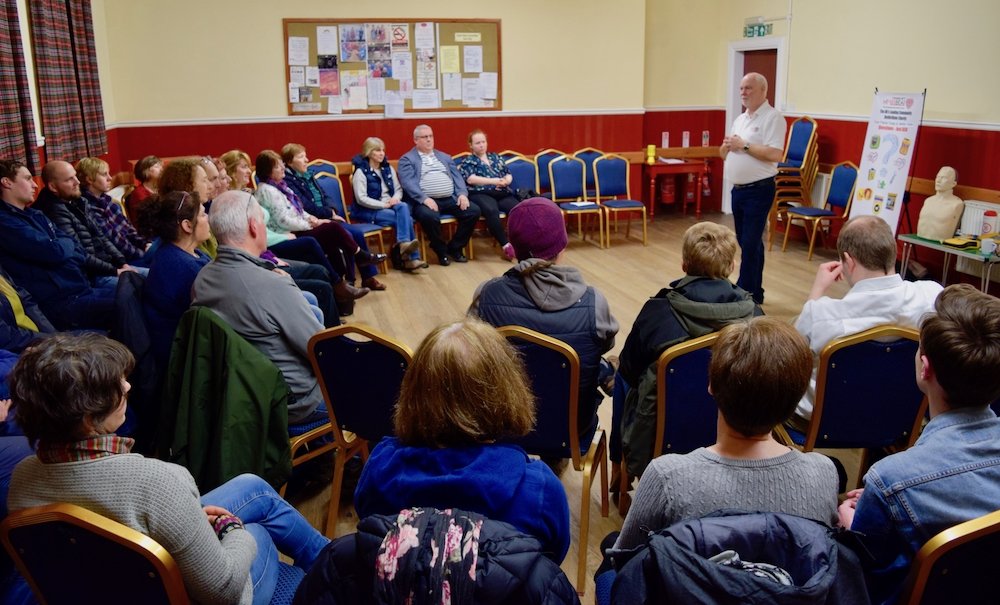 Almost 40 Alyth folk braved the cold last night (14 March) to turn out for the first of what we hope will be a series of Defibrillator Training Sessions this year. ?Martin Hagan from the Community Heartbeat Trust (CHT) travelled all the way from Rutland to deliver the session with style and humour. ?He explained how the human heart works and what could make it stop, and set out clearly and simply what to do if someone collapses, with handy hints and memory aids on how to administer effective CPR. ?He also demonstrated the hi-tech defibrillator that CHT has now installed in the squinty phonebox on Market Square, with generous funding from The Collective UK. ?We’re now waiting to hear about funding to install two further defibrillators locally – one in New Alyth and one in the Alyth Den carpark. ?Get in touch if you’d like to be kept informed about further training sessions or if you’d like to join our list of volunteers to help check our defibrillators weekly and make sure they stay in tip-top life-saving condition.

Do you run a guest house or hotel? Do you know a local accommodation provider? If so, it could be worth your while to check out the Live Active Tourist Discount scheme.

Live Active Tourist is a simple and yet genius idea that will appeal to accommodation providers across the area who are looking for ways to reward their customers and offer up a little extra.

With the Live Active Tourist Discount vouchers, guests will be able to enjoy LAL facilities at the same price as that of local Live Active card holders. With over 15 venues across Perth and Kinross including swimming pools, gyms, climbing walls, sports halls and an ice rink, Live Active has something for everyone.

Perthshire Talks Tourism invites tourism businesses from across Perthshire to join them, as part of Scottish Tourism Month, to explore potential opportunities for local business.

2018 is the Year of Young People, aiming to inspire Scotland through its young people, celebrating their achievements, valuing their contribution to communities and creating new opportunities for them to shine locally, nationally and globally.

Find out how your business can get involved in this themed year and become part of Perthshire?s celebrations.

In 2018, we also welcome the opening of the V&A Dundee. This event will focus on how your business can maximise the opportunity of having this internationally significant visitor attraction on your doorstep.

The Perthshire Tourism Partnership has teamed up with VisitScotland and Perth & Kinross Council to host and deliver this FREE conference. Take a look at the full programme of speakers and book today to secure your place: 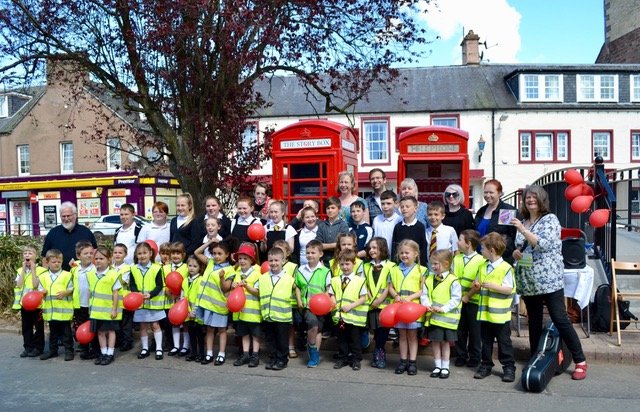 Since our launch last May last year, the Story Box Project has collected 133 stories from around Alyth which are available to hear every day of the year in the phone box in Alyth Market Square. We would like to thank all of our contributors for sharing their stories. We would also like to send a huge thank-you to the staff of the Co-op who tirelessly open the Story Box in the morning and lock it at night, keeping it safe after dark. To all our story contributors and volunteers we send our best wishes for a very happy 2018.

We are still collecting stories for the box so please get in touch if you would like to take part and record your story. New stories are downloaded about every four months so there is always something new to listen to in the Story Box. Remember, your recording can be a memory of childhood, a quirky family tale, a spooky story, a local song or poem or anything about your everyday life in Alyth now. All our stories are digitally archived with AK Bell library so this is a great way to make sure your family history is preserved for future generations to hear. We collect stories from the past, the present and even the future! Let us know what you think Alyth will be like in the years to come.

Story Box WiFi Hub
The WiFi hub at the Story Box has been a great success with young people of the town, those waiting at the bus stop and visitors. However, you may have noticed that the WiFi Hub wasn?t working for a while from November. This was due to the closure of Alyth Community Council who were the named account holder on the BT phone line contract for the Story Box. Despite Story Box project funds being available to pay the bills, after the Community Council closed BT couldn?t change the name on the account, nor could we find a way to pay them as our funds are held by the charity NEoN, who cannot pay an invoice not addressed to them. So unfortunately the line was shut down by BT. The great news is that since Christmas the line has been re-connected and the WiFi hub is now up and running again, providing a valuable free-to-use broadband internet service for everyone in the town centre. Many thanks to Alyth Development Trust who stepped in to help and have agreed to be the account holder for the BT line until the end of the project in 2019.

The Story Box and ?100 Objects?
Some of you may have been involved in and/or enjoyed one of Cateran?s Common Wealth?s sister project ?A Story of the Cateran Trail in 100 Objects? which collated community suggestions for people, landscapes and objects that tell the story of Cateran Country. The exhibition was launched in Alyth Museum last summer and broke all box office records for the Museum with over 1,000 people visiting in July, August and September. We have teamed up with the 100 Objects project to record a series of interviews with local people who suggested some of the objects. The interviewees tell the story of their ?object? and discuss its importance in the culture of our area.

These new stories will be available to hear both in the Museum, to accompany the Exhibition when it returns this summer for a second showing and in The Story Box itself. They include: willow weaver Jane Wilkinson talking about woven tatty creels; poet Jim MacKintosh talking about the enduring influence of local cultural icon Hamish Henderson; Linda Cullis talking about her family links with the artist ?Blairgowrie Girl? Jane Spindler; Ashleigh Slater talking about the inspiration and weaving of the Berries and Cherries tartan; Ian McGregor talking about the story and song collecting legacy of his traveller family including his mother Sheila and grandmother Belle Stewart; and Janey McFarlane and Ron Kirkpatrick reading poetry by 19th-century Alyth poets William Pyott and James Young Geddes.

To record your story get in touch with Marian Bruce on 07917 430200 or by email to info@driftwoodscotland.com